DRUGS THAT MAY HELP TO AVOID DEATH FROM OLD AGE 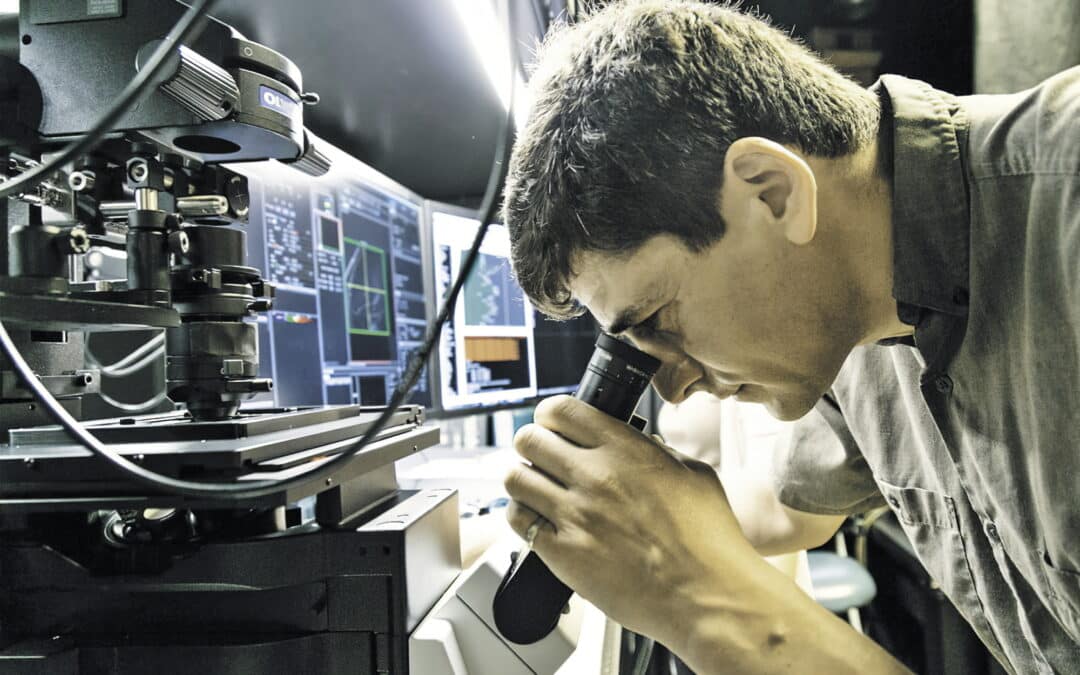 A well-known Russian and American scientist, professor at Harvard Medical School, Leonid Peshkin, leads a group that studies the problems of aging, longevity and creates drugs that, one day, may help to avoid death from old age. One of the projects is being implemented by a geneticist with the participation of talented Russian students.

“Death is a mistake of nature” … Leonid, what did you put into this phrase?

Leonid Peshkin: The fact that I do not see anything natural in death. Every day in the world about the same number of people die from old age as from the explosion of atomic bombs in Hiroshima and Nagasaki. Every day we lose about 150 thousand people. It is illogical to regard one as a tragedy and the other as the norm. It is simply ridiculous that we live under the burden of inevitable death, most often painful death. This is mistake.

Look from the point of view of society: a person is born, learns to walk, speak, read for a long time, by the age of 25 he receives an education and becomes useful to society. And only after some 40 years it grows old and dies. It would be much more reasonable if people were not doomed to die of old age, but lived as long as they saw fit.

Note that aging does not seem to be a biological necessity at all. We have studied different types of animals and we know that there are animals that do not age. This does not mean that they do not die at all, but as they age, their chances of dying do not increase. That’s what’s important. They do not grow decrepit.

Do you mean naked mole rats?

Leonid Peshkin: Not only, although if you go deeper, you can talk for a long time only about these amazing creatures. Naked mole rats, for example, hardly get cancer. But this is a topic for a separate publication. There are other animals that do not seem to age – sturgeons, some sharks and crabs.

What do they die from?

Leonid Peshkin: In nature, they either die in the teeth of a predator, or because they cannot find food for themselves. It is different in the laboratory and in the zoo. No one cancelled the infection, they get sick, die from microbes and viruses. You see, there is always a chance of dying.

Tell us about the essence of your work.

Leonid Peshkin: There are two main areas of our work, the first is how to find a remedy for aging. And the other is how to check its effectiveness, if this remedy is found. It doesn’t matter if I or another group of scientists found it.

We have created a platform using artificial intelligence systems that allows us to test various substances. And to identify among them those that affect life expectancy. In doing so, we check how a particular substance affects not only the duration, but also the quality of life.

Leonid Peshkin: No, firstly, people are all different, they live in different conditions, everyone has different diets. Secondly, human life expectancy is too long, the results of the experiment, at best, will only be received by the next generation of scientists. It helps that all living things are very similar, consist of similar genes, cells, tissues, organs, and one can hope that they also break in the same way. We came up with the idea of ​​using animals that we had never used before, these are small crustaceans – daphnia. They live only a month. We have created a system in which we can observe tens of thousands of these animals at the same time and test various preparations on them. We look at what happens to a living being during his short life. But in order to speed up the process, hundreds of laboratories in the world must do this, try hundreds of different substances in order to find all, perhaps two or three, that extend life a little, and then this will be only the first step. That is, we have to create such a testing platform and distribute it to colleagues.

Where are you going to look for the anti-aging remedy itself?

Leonid Peshkin: No matter how funny it is, look where it is said in fairy tales. Remember, the end of Koscheeva’s death was in the egg. And it so happened that the secret of longevity is in the egg, more precisely, in the eggs. Nature itself, evolution has already found the secret of longevity and immortality, it is just that it has not yet been used to extend the life of you and me, adult organisms. This is a well known observation and is called germline zeroing. What happened when I was born? They took a cage from my mother, which had existed as long as my mother herself – 35 years. This cell was exposed to ionizing radiation, metabolic processes and oxidation took place in it. She accumulated trash. Then this cell met with my father’s sperm, which at that time had existed for almost 50 years. This sperm was also exposed to radiation and all kinds of damage. And this joint cell, which is either 50 or 35 years old, has formed an organism that is zero years old. The age was zeroed and debris was cleared. Amazing mystery of nature! That is, the genome already contains some kind of program for zeroing and getting rid of the garbage accumulated with age. It just doesn’t turn on in adult organisms. If such a program did not exist, then each generation would live less and less until all living things disappeared from the face of the Earth. Leonid Peshkin – with optimism: Look for immortality in an egg. Photo: From the personal archive of Leonid Peshkin

Are there many scientists in the world dealing with aging problems?

Leonid Peshkin: If you and I do not live to see a pill from old age, then this is due to the fact that a lot of science today is outsourced to business with an emphasis on quick turnover and profit. When people ask me: “When will you start selling pills for old age?” – I honestly say: “I do not know, most likely, we will not live to see this.” Hearing such words, potential investors answer: “Thank you, it was interesting to talk to you. All the best.”

Fundamental research into the causes and scientifically based fight against aging is carried out by at least 20 laboratories around the world. If this area does not receive generous, selfless support from philanthropists at the level of funds that go to churches, orphanages and museums, if capital is not simply given in exchange for a chance to prolong a healthy existence, and not in exchange for probable profit, we will not see results.

You are the person whose genome is today the best painted on the planet, who agreed to give it to science for use as a standard in laboratories around the world. Why did you decide on this?

Leonid Peshkin: It happened by accident. In Boston, where I live, in one of the scientific centres they founded a program and began to look for a person who would donate his cells and would not mind having his full genome posted on the Internet. Partly I did it out of stubbornness, as opposed to the general panic: “Do not put your genome on the Internet, everything about you will become known, and you will suffer.” This alarmism is unfounded and is terribly harmful to science. If the average American is told “let’s make you a free genome, but everyone will know about it,” he will say “no.” A person fears that he will have a predisposition to disease and will be discriminated against at work or not insured. But I understand that we will not be able to fully interpret and understand the genome, probably for another decades, there is nothing to fear from discrimination. What does my genome mean – the best characterized genome on the planet? This means that in this long text in an incomprehensible language, every letter was read very accurately. But we must understand that this book is written in a language that has not yet been deciphered.

What is science from this? My genome is used as a standard in scientific research. As reference weights in the market when we buy strawberries.

Leonid, in your opinion, what will happen after death?

Leonid Peshkin: I consider death a mistake of nature precisely because it is quite obvious to me that after death there can be nothing. The very concept of “being” after death loses all meaning, it is a semantic zero. Everything that we put into this concept is based on what we perceive through our senses – sight, touch, smell exists only in the body, and there can be no “being outside the body” by the definition of this concept itself. We only feel while we are alive.